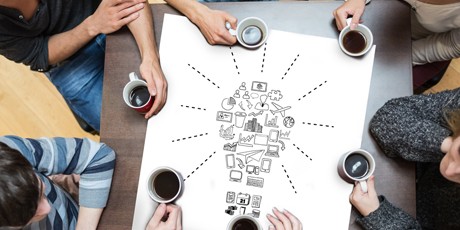 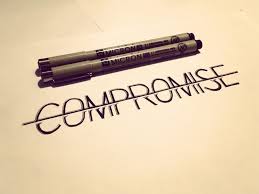 Compromise is an agreement, a settlement of a dispute or differing opinions that is reached by opposing sides making concessions.

After years of working with teams around leadership, creativity, and innovation one thing we notice is that when groups are attempting to make a breakthrough innovation, solve a longstanding problem, they often and sometimes unknowingly default to compromise.

Compromise is not a bad thing, its necessary sometimes. The problem is that compromise is the wrong strategy for innovation. Yet teams use it all time to innovate.

Innovation and compromise are two different aims. Innovation emerges when diverse perspectives come together to generate a wide range of ideas, then refine and evolve their ideas into something never created before. It requires passionate disagreement, it creates tension, it calls on patience. Then the breakthroughs happen.

The problem is that compromise is the wrong strategy for innovation. Yet teams use it all time to innovate.

Compromise, on the other hand is a settlement of differences. It has the effect of taming passion and the opposition required to create and vet new innovative ideas.

Compromise and innovation can’t and should not work together.

HOW DOES THIS HAPPEN?

Why do groups opt for compromise when its the wrong strategy for innovation?

Sometimes groups reach a point of dispute, opposition is high, strong opinions and emotions are present. No one understands how to move forward. To release tension and find movement, concessions start being made in the spirit of progress. Soon the group finds itself at a place of enough agreement to move forward with something that satisfies everyone just enough, but inspires no one.

Other times a group reaches the same moment where tensions are high and strong opinions and emotions are present. Power dynamics come into play, and in subtle ways people back off their positions because of the fear of being in opposition with the formal leader. The group begins to defer to power, making concessions from their original opinions so as to fall in line and not rock the boat too much. Settlement reached, compromise made, passion and engagement tamed.

Some groups are too nice to even surface strong opinions, compromise happens as part of the process of keeping the peace. Leaders value harmony while losing passion and engagement. One prominent CEO we worked with made it clear they liked being around ‘positive people’ — which could be interpreted as code for people who don’t shake things up, or people who agree with me.

Finally, a whole myriad of forces outsides the groups control can move a group to compromise. For example, the pressure of taking action in moments of crisis or opportunity. The need to just produce something, anything to have the appearance of efficacy (see US Congress).

THE COMMON DENOMINATORS OF ALL INNOVATIVE EFFORTS

The appeal and the problem with compromise is that its a technique used to deescalate conflict, opposition, and disagreement.

However, innovation must involve passionate disagreement. The tension of disagreement can be hard to withstand. It’s stressful. People feel the tension of opposition and might try to discourage differences, but that only stifles the rich discussion that innovation thrives on. What’s needed in these moments is for leaders to hold and channel this tension into creating an environment that stays open and constructive but also oppositional enough to deepen ideas and deliver original thinking.

When groups reach a moment of opposition and uncomfortableness it is not time to dig in or make concessions. It’s time to double down on the commitment to innovation. This commitment requires patience, emotional courage and intelligence, the skill and willingness of the entire group to continually express what they think, feel and want in the moment, while genuinely following and listening to what others are expressing. It requires remaining open to changing one’s position upon the discovery of new information, it requires giving up the need to win the conversation.

How do you know your group is doing deep innovation? You’ll notice these things:

Who sets the tone for this kind of innovation? The leader.

Do you have what it takes?