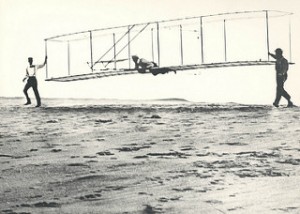 In his book The Wright Brothers, David McCullough illuminates the communication strategy that made their inventions possible – they regularly engaged in heated exchanges for days on end, each brother passionately advocating for his own ideas. They argued so much, in fact, that their sister threatened to leave home if they didn’t stop.

Arguing was just the first phase of their communication technology. The second phase – the innovative phase – didn’t kick in until they became curious about the other’s point of view. So genuinely curious, in fact, that they often adopted each other’s viewpoint.

The Wright Brothers combined conviction with curiosity. The end result was extraordinary innovation.

In today’s competitive business climate, 97% of CEOs identify innovation as their top priority. But given the relentless pressure to adapt to changing conditions, today’s leaders don’t have the luxury of arguing for days on end like the Wright Brothers.

In order to fuel extraordinary innovation, we need a game-changer. Success in the current reality – innovate or become obsolete – requires a third component, one that’s much more dynamic.

To triumph in the modern era, the innovation equation has evolved into a three step process:

1.   Express your thoughts and ideas with passion and conviction.

2.   Let go of the need to be right and become genuinely curious about other team members’ points of view.

Of course, this communication technology only worked for the Wright Brothers because both of them did it. The pivotal element that leads to success is developing your team’s capacity to utilize this approach together.

In a world of “innovate or become obsolete,” gaining every advantage in the marketplace is essential. Combining conviction with curiosity has changed the world before and it can galvanize your team.

What would be possible if your team was fluent in this communication technology?

How might innovation take-off in a culture that values the ability to intelligently hold the tension of opposing viewpoints while simultaneously looking for the emerging genius in differences?

What would it feel like to have the freedom to express your ideas with conviction and authenticity, allowing others to do the same, and innovating together with curiosity?